Domino v11 is coming in the last quarter of this year, and last week we just got an in-depth overview of what will be new with this coming version, as well as a look at the path of continued future development for this platform.

HCL laid a strong foundation for this release with all the features and updates that came with version 10 last October. The overall goals continue to be as promised back in early 2018: 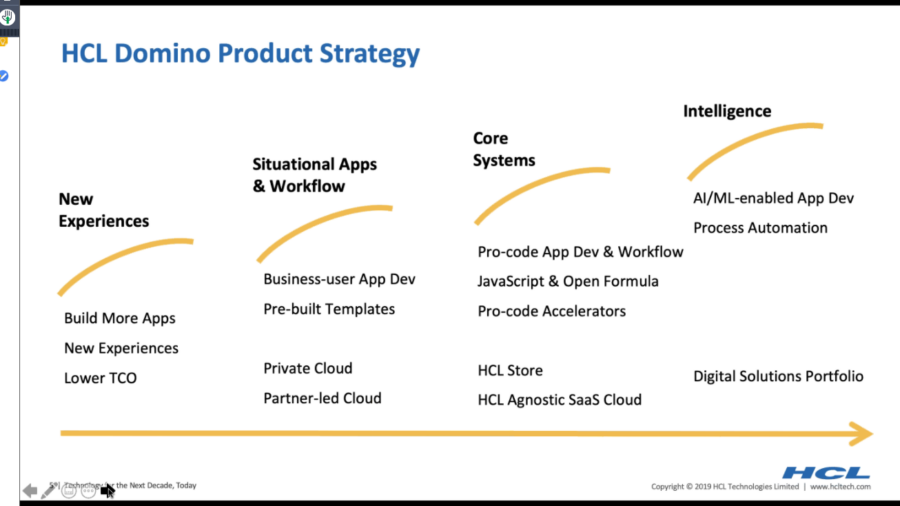 First and foremost, a better integration with the Microsoft ecosystem and synchronization with the Domino Active Directory is a top priority.  There will also be improvements in the way it allows other authentication methods integrating with the platform, as well as moving to Open JVM 8 and OpenSSL. 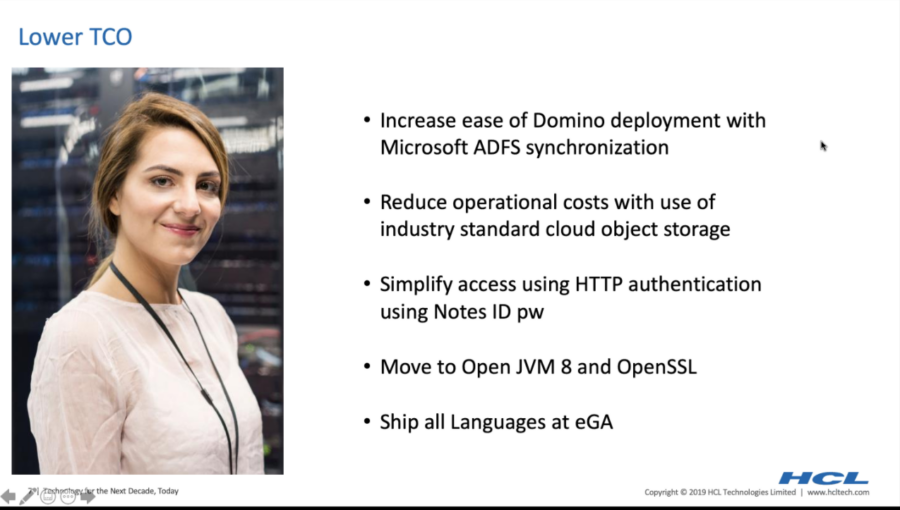 Organizations using DAOS to optimize storage will be able to take advantage of the S3 integration, whether it be through AWS or another S3 compatible environment in the future. The goal is to have a single object store with single attachments across all the servers, which would allow you to reduce storage costs. 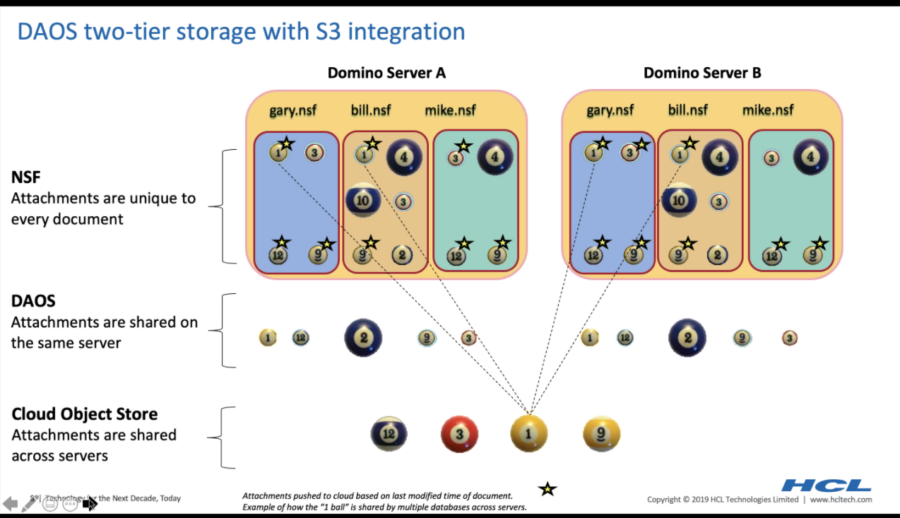 V10 added a Node.js interface, which allowed developers with Node.js to build applications on the platform. With the Domino Event Publisher, any activity, such a s creation, deletion or a change to a document is detectable and added on a message queue, which is in turn picked up by a subscribing application in real time. It opens a lot of possibilities for developers, such a s integrating with elastic search. 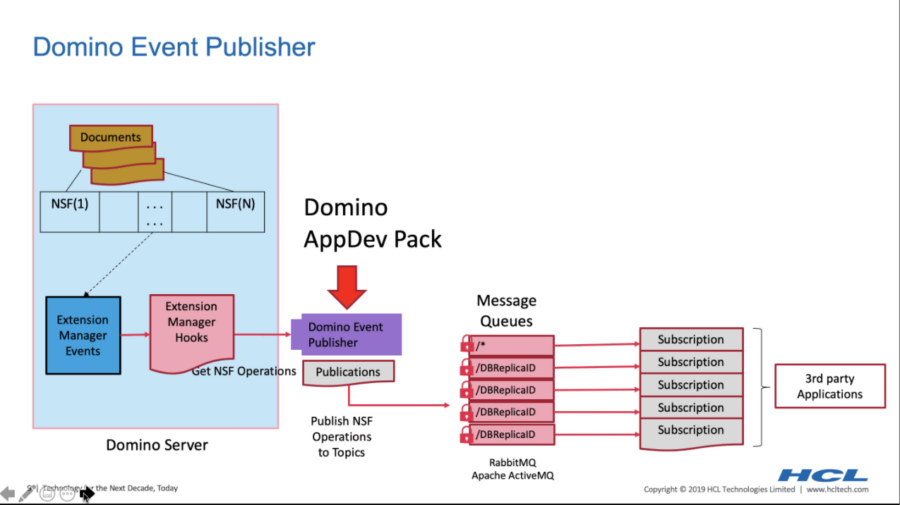 There are 17 languages planned for release, with the goal of having all the languages available at the time of release. 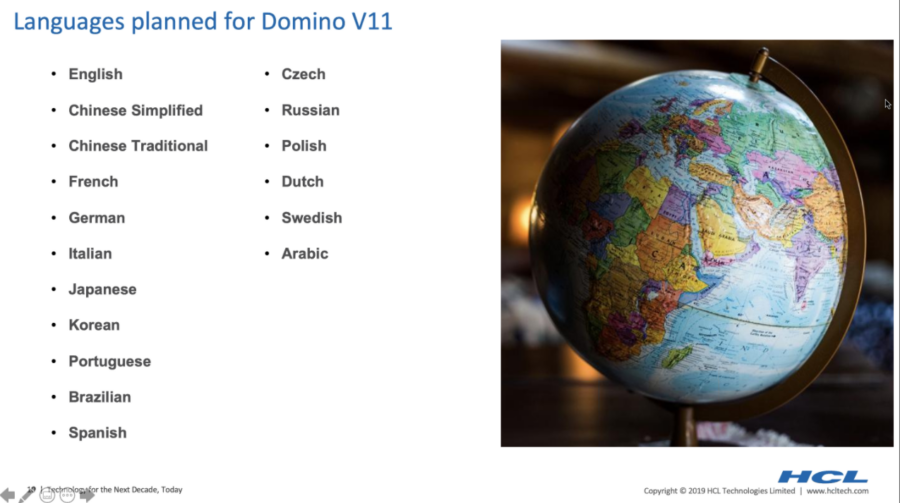 The current components of writing an app on the platform are integral pieces that will continue to be preserved and added onto, to enable more people to use the platform. By giving a web-based builder and runtime that has workflow capabilities that will be added to the Domino platform in the v11 timeframe. It will allow every Domino user to build an application. 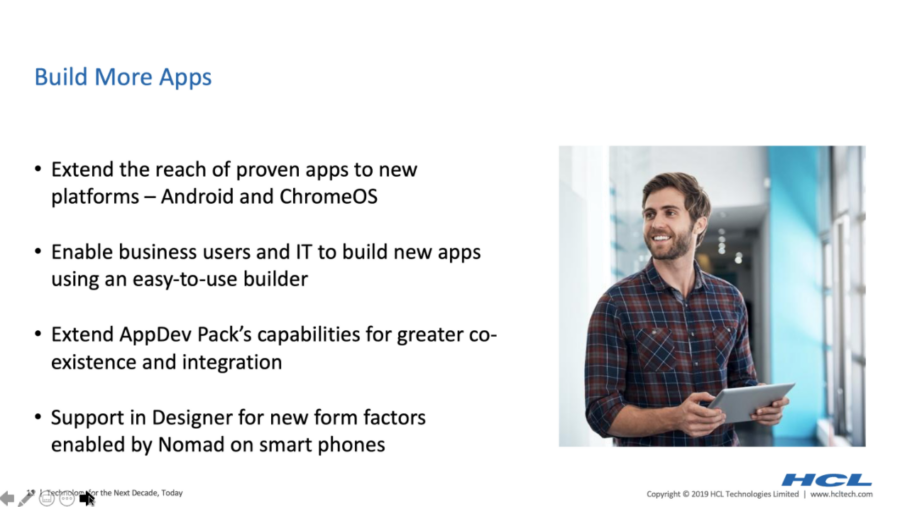 Next steps will see integrating Openformula in addition to LotusScript and making Node.js a core feature as opposed to a current App Dev pack. Building applications with NodeRED greatly accelerates application building. Future versions will also see further investments in the core technology stack, as well as a push towards containerization. 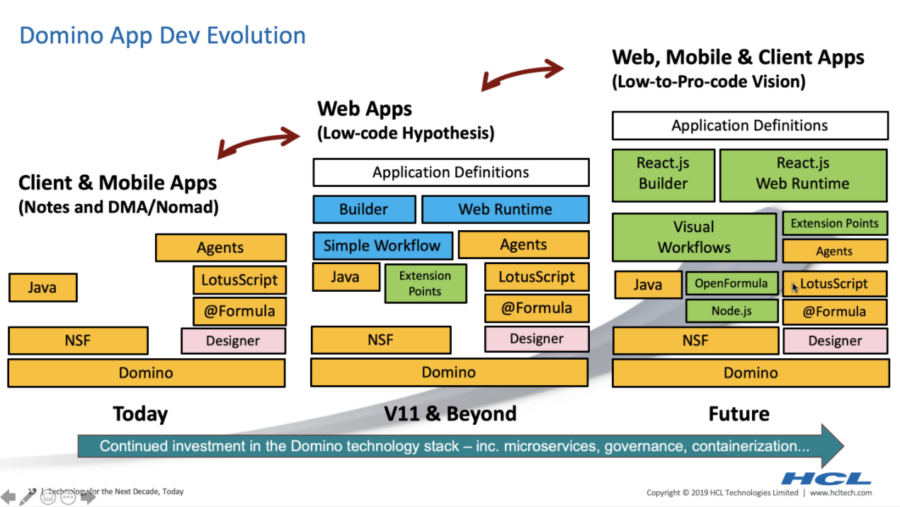 In v11 the goal is to have a BETA version of LEAP running on the Domino platform. It is currently available in the sandbox on the HCL website. LEAP is a web-based form builder with workflow capabilities that are already being used by several organizations to build apps. It works well with Domino, and the aim is to integrate it along with its runtime directly into Domino, so the applications built-in it are Domino NSFs and run directly on the Domino platform, eliminating Websphere completely. In the coming months, there will be a separate webinar to showcase it. 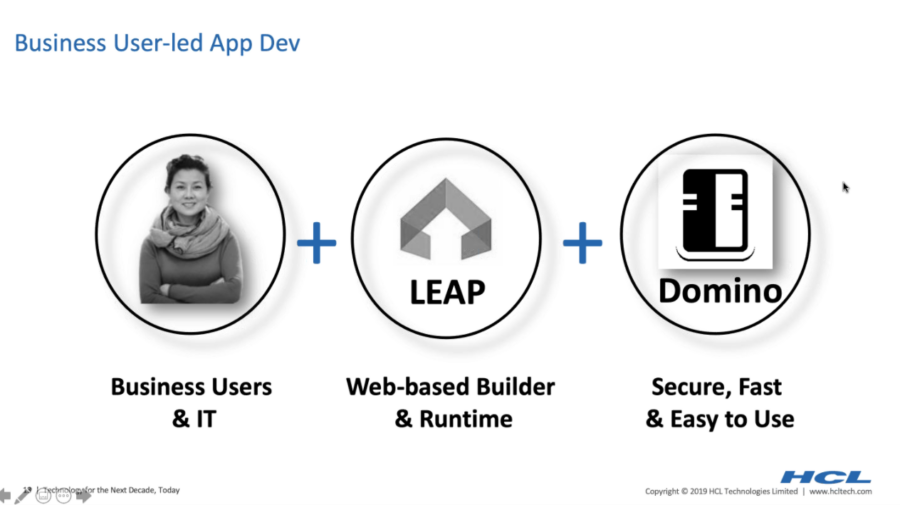 In the future, Domino apps will be able to run natively on all mobile devices, including iPhones and Androids. The plan is to also have it run in a mobile browser as well. The specifics of timelines for this will be coming up in the future as well.

The iPhone, ChromeOS, and Android tablet will be available with v11. 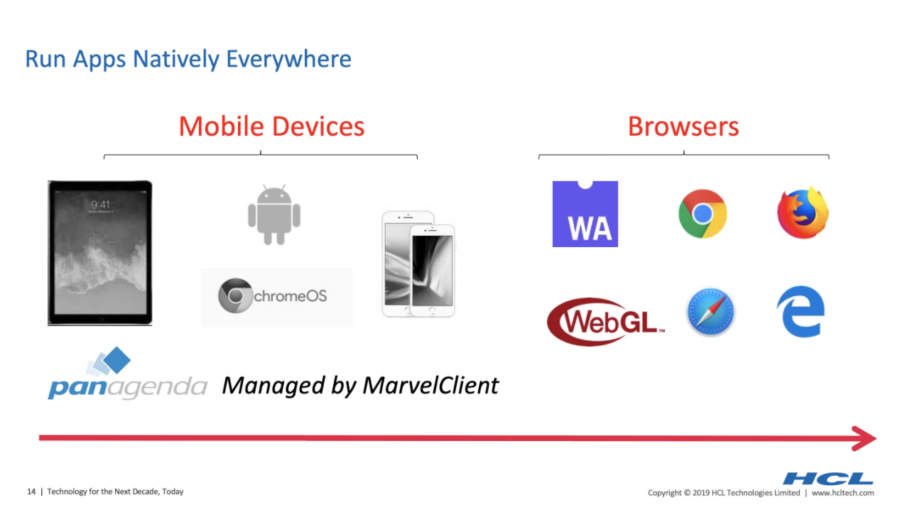 There will be some additional enhancements this quarter, with the Domino App-Dev pack. V11 will see some NotesJSON library improvements to allow to better handle JSON documents, as well as some extensions to LotusScript. You will be able to include GPS-based services into your mobile apps.

You will also be able to create indexes on columns and views without using Designer, as a DDL statement, as well as adding Full Text search and wildcard support in DQL. 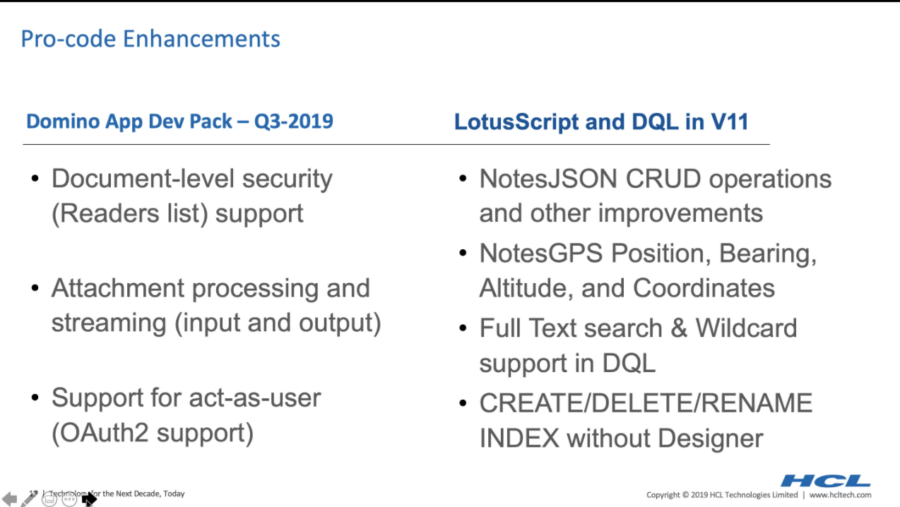 There will be another webinar on Sametime soon. The Safelinx (formerly known as IMC or Mobile Connect) release as a product is very close which will be available shortly, which is great for providing VPN or reverse proxy information. 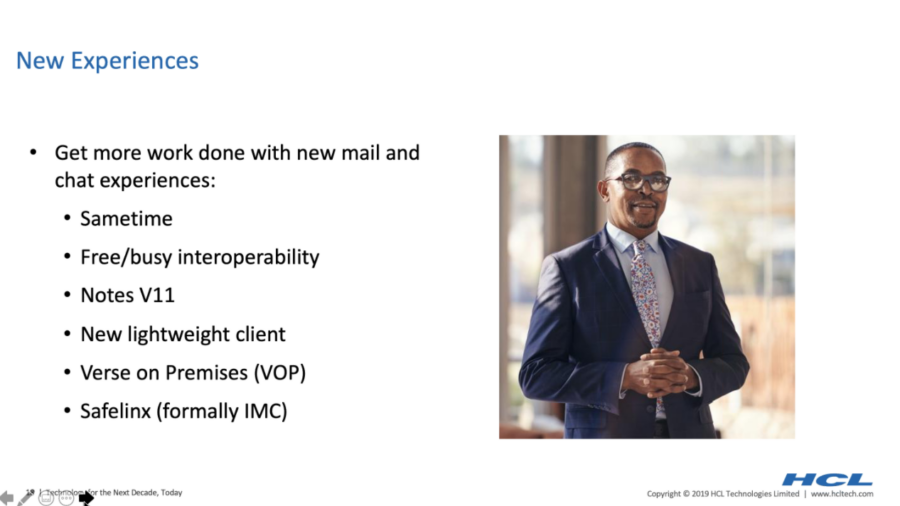 To meet the continued requests for better interoperability of free time / busy lookups with Exchange, Office365, and Gmail, HCL has partnered with OnTime and ApprovedContact to bring that capability to market for both on-prem and cloud environments. 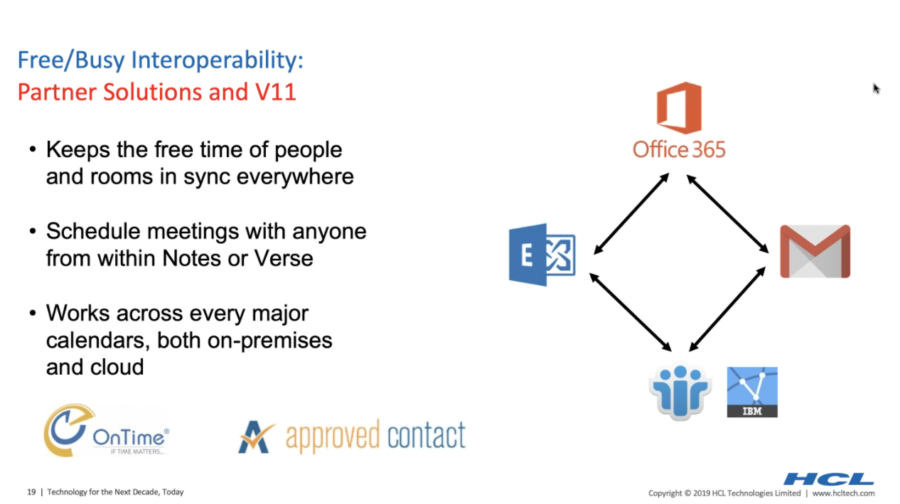 The ability to run Notes apps natively on a browser is a core priority, and while the Notes client improvements will continue, there is a need for a lightweight client for both mail and apps.

Once the Web Assembly pieces are in place, and Sametime is capable of running in a web client, the plan is to bring those together with Verse for mail, to immediately have a solution that has a smaller footprint, with HTML and JS extensibility only. It will also allow for quarterly updates moving forward. 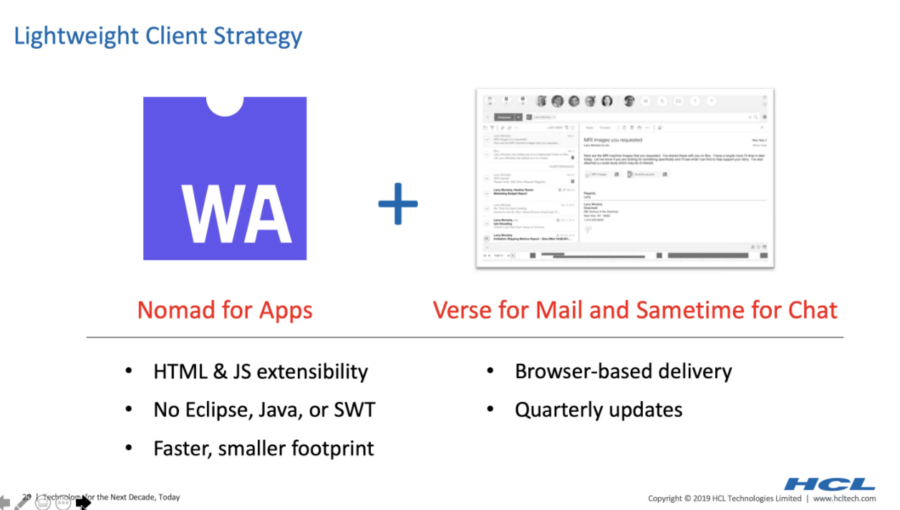 Verse will have a  v1.0.8. still coming this quarter, which will include a list of improvements, and the future development in v11 will include iNotes, and in the versions after that iNotes will be retiring after bringing the desired iNotes capabilities into Verse. 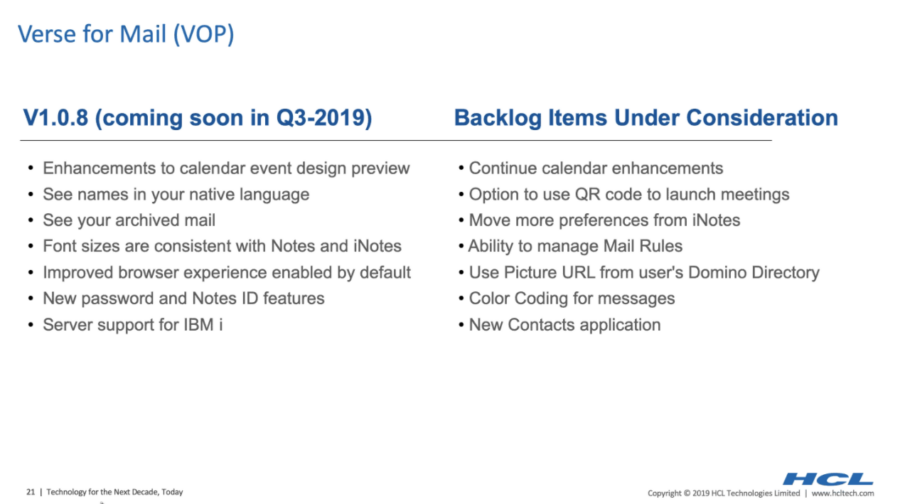 Finally, there will be a new version of the Notes client, with an overhauled user experience, with template refresh,  Open JVM 8 support and some other features. 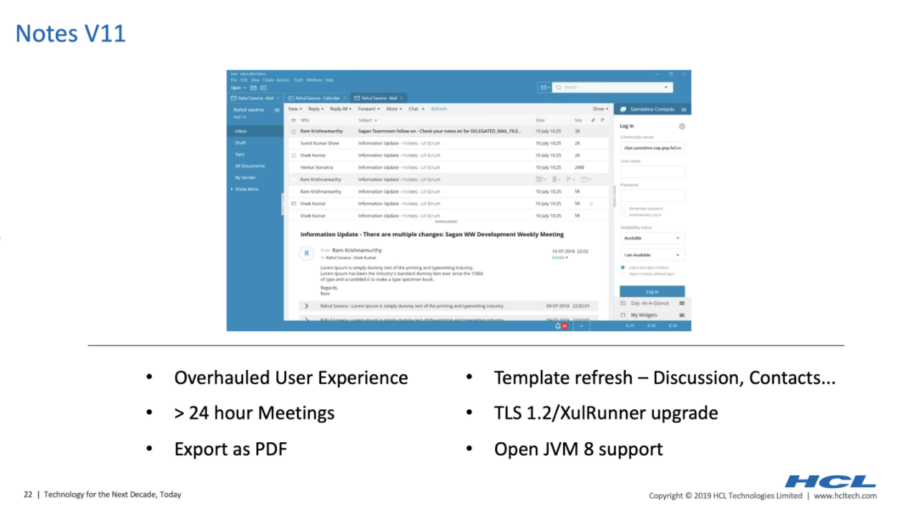 THE BETA IS COMING

Domino v11 BETA is coming in September, with a number of specific drops throughout. There will be a Domino-based forum to participate in. HCL will continue to seek out feedback for everything from documentation to licensing. The first drop will take place on September 16th. 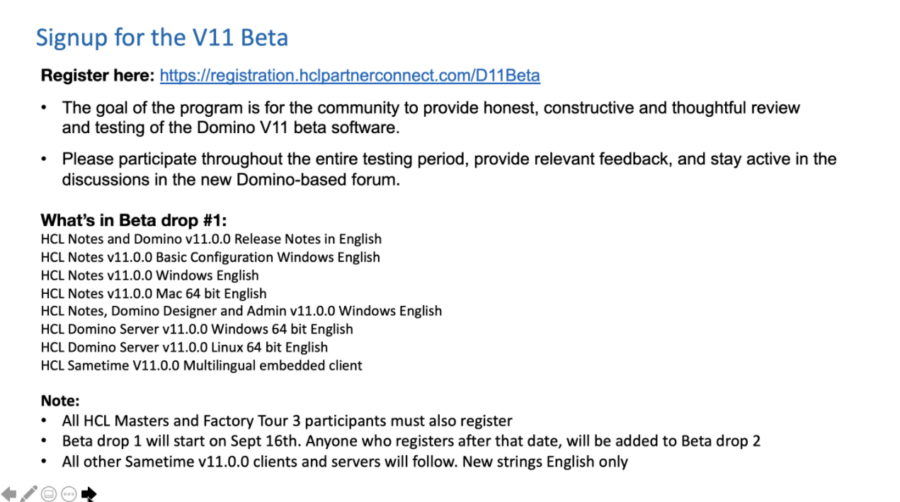 THE FUTURE OF XPAGES

HCL will continue to support XPages for the foreseeable future. The current app-dev pack is very Notes JS oriented. However, HCL understands that for a number of organizations it may be more appropriate to have a more Java-oriented version of the same API, to better fit a whole class of XPages applications in use.

As of July 16, 2020, IBM’s Connections Cloud and IBM’s Domino Apps on Cloud platforms will cease to exist. Customers using these services will have until that time to migrate their Notes & Verse Email, Domino Applications, Connections, Sametime, Docs, and Engagement Center either to their own private cloud or to a partner cloud.

HCL is in talks with business partners, as well as working on their cloud strategy. There will be more updates and announcements coming up in the next few weeks regarding this transition. Stay tuned.

If you would like to watch the webinar recording, it available HERE:

We use cookies on our website to give you the most relevant experience by remembering your preferences and repeat visits. By clicking “Accept”, you consent to the use of ALL the cookies.
Do not sell my personal information.
Cookie SettingsAccept
Manage consent

This website uses cookies to improve your experience while you navigate through the website. Out of these, the cookies that are categorized as necessary are stored on your browser as they are essential for the working of basic functionalities of the website. We also use third-party cookies that help us analyze and understand how you use this website. These cookies will be stored in your browser only with your consent. You also have the option to opt-out of these cookies. But opting out of some of these cookies may affect your browsing experience.
Necessary Always Enabled
Necessary cookies are absolutely essential for the website to function properly. These cookies ensure basic functionalities and security features of the website, anonymously.
Functional
Functional cookies help to perform certain functionalities like sharing the content of the website on social media platforms, collect feedbacks, and other third-party features.
Performance
Performance cookies are used to understand and analyze the key performance indexes of the website which helps in delivering a better user experience for the visitors.
Analytics
Analytical cookies are used to understand how visitors interact with the website. These cookies help provide information on metrics the number of visitors, bounce rate, traffic source, etc.
Advertisement
Advertisement cookies are used to provide visitors with relevant ads and marketing campaigns. These cookies track visitors across websites and collect information to provide customized ads.
Others
Other uncategorized cookies are those that are being analyzed and have not been classified into a category as yet.
SAVE & ACCEPT